And how do you get it?

Well, hopefully, this post will help you to understand the money situation in Vietnam.

Hopefully it will also clear up a few ‘myths’, or perhaps, misconceptions, about the best way to go about paying for things in Vietnam.

So, what is Vietnam’s currency?

It is the Vietnamese Dong (VND), and it is the ONLY official currency in Vietnam.

Apart from VOA (visa on arrival) – see here – Vietnam Visas – there is nothing in Vietnam that needs to be paid for in anything other than Dong.

Why am I pushing home this point?

Well, as you trawl around the internet, researching your upcoming trip to Vietnam, you will no doubt see a lot of hotels and tour agents quoting prices in US dollars (USD).

Why do they do this?

While most people would have a rough idea of the comparison between their own home currency against the USD, the vast majority would have absolutely no idea when it comes to comparisons with the VND.

So, while the prices may be quoted in USD, there is absolutely no requirement to pay in USD.

In fact, it is actually illegal for any Vietnamese company or business to ask for payment in any other currency, other than VND.

And if I ever found myself dealing with a company that wanted to be paid in USD, I wouldn’t hesitate in finding someone else to do business with.

Now, from time to time, you may hear of people using USD to pay for things over there.

The question is, should you do it?

Well, in several trips, and something like a total of 12 weeks over there, we have never paid for anything (apart from VOA) in USD.

And we never will.

One, VND is Vietnam’s official currency.  Because of that, I’ve just never understood why you would even consider using another country’s currency there.

Two, the exchange rate that will be used to calculate the price of your purchase will be determined by the business owner.  Not you.

And because of that, who do you think the rate will favour?

And the same goes for any change that you are given, because I can assure you that your change will be in Dong.

And three, well, it’s just so damned confusing.  Imagine converting your, say AUD, into USD, and then trying to work out what your change is going to be in VND?

And doing it all in your head!?

Yep, much easier to have an idea, before you travel, of what one of your dollars / pounds / euros / insert whatever applicable currency, is worth in comparison to VND.

Yes, as with all new things, and all those zeros don’t really help, it can all seem a little confusing at the start.  But trust me, you’ll quickly get the hang of it.

And here’s a little tip for future US and Aussie travellers to Vietnam, to help with understanding how ‘x’ amount of Dong converts to both the USD and the AUD.

And how do you do this ‘in your head’ calculation?

Yes, if you’re Australian, at the current rate, it’s going to be a bit more.  About 20% more, to be exact.  So while 100 000 Dong is actually $6, it’s close enough when you’re buying relatively low cost items or food.

Obviously, if your currency is the USD, then it’s going to go the other way.  But again, as far as I’m concerned, close enough.

There are other ways around ‘dealing’ with the conversion, eg, little charts to keep in your pocket, your phone’s calculator, or maybe even a screenshot on your phone, but do you really want to be constantly looking for your little laminated chart, or worse, standing in a crowded street trying to read small numbers on your phone?

Yeah, doesn’t sound like much fun, nor terribly safe, to me either.

So, anyway, after all that, what does Vietnamese money look like, and what denominations does it come in?

Well, I suppose the good news is that there are no coins, so that’s one less thing to think about.

While the paper notes are worth very little, they do add up, and they also come in handy for paying the small fee that you are often asked to pay to use certain toilets and restrooms you’ll see around the cities.

The front and back of Vietnam’s six polymer denominations.  Note the similarities in some of the colours.

The three paper notes.  Not worth much, but they do come in handy.

So, now that we know what the currency is, as well as what it looks like, how do we go about getting it, and what options do we have to pay for things?

ATMs, which only dispense VND, are arguably the simplest and easiest option.  And don’t worry, you’ll find them everywhere the vast majority of tourists go, as well as most of the more ‘off the well trodden path’ places, too.

But before you add a debit / credit card or two to your packing list, there are some things you need to know.

First, find out from your bank what they are going to charge you each time you use your card in an ATM, or in an EFTPOS machine belonging to a business. The international fees some, read many, banks charge, may not seem overly expensive at first, but be aware that those charges quickly add up.  It’s not unusual for a bank to slug you $5 for each transaction.  You’ll also have ‘their’ exchange rate to contend with.

Second, ATMs in Vietnam have limits on how much you can withdraw each transaction, and that limit, on average, is usually only around 3 000 000 Dong. ($150, give or take)  While some machines have higher limits, they can sometimes be difficult to find.  There’s nothing stopping you from making several withdrawals one after the other, but remember that possible $5 transaction fee?  Yep, that’s going to start to hurt.

And third, ATM fees. Yes, there’s also a fee to use ATMs in Vietnam.  It varies from machine to machine, and can be anywhere from 20 000 – 60 000 Dong per transaction.  Again, not a huge cost, but accumulated over a number of transactions over several weeks, well, it’s just another holiday expense you need to deal with.

Exchanging many of the world’s currencies in Vietnam, including US dollars, Euros, Pounds, and Australian dollars, is very easy.  It is also very cost effective, as there are usually no transaction fees.

It’s also worth noting that the exchange rate you will be offered in Vietnam is far better than the rate you receive at home, so it is strongly recommended that you hold off from buying Dong until you arrive in Vietnam.

So, where can you exchange currency in Vietnam?

Well, there’s several options, including banks, foreign exchange stores, jewellery / gold shops (technically illegal, but you’ll find plenty of places that will happily do it), the many tour agents you’ll see dotted around the major towns and cities, hotels and airports.

While the rate fluctuates daily, along with different businesses also offering varying rates, you will usually find they are all in the ballpark of the official rate.

And yes, even at the airports.  Airports in Vietnam are a little different to airports in other countries, in that regard.

So, using banks may seem like the obvious one, but be aware that it will take a little more time as you’ll need to supply your passport, as well as fill out some forms.

The rest are pretty straight forward, in that you simply ask the rate being offered, and then, if you’re happy, exchange your own cash for the equivalent in Dong.

Ok, so how to go about swapping your own money?

First, make sure the notes that you are exchanging are in good condition. ie, they’re not torn, or have writing on them.  Having higher denomination notes is also a good idea.

Second, have an idea of what the official rate is before you enter whichever establishment you’ve chosen.

To do that, either download a currency conversion app to your phone, or simply check out a currency exchange website.

The rate that the app or website tells you won’t automatically be the rate that you will be offered, but it should be close.

If you’re not happy with what you’ve been offered, then simply move onto the next one.

If you are happy with what’s being offered, then go ahead and do the deal.  Make sure you are given a good mix of denominations; while a wallet or purse full of 500 000 Dong notes is less bulky to carry around, changing them on the street for low cost items like food, drinks, and even taxi fares, can be problematic.

You don’t really want any of the almost worthless paper notes, which you’re unlikely to receive anyway, but having a few 100 000 Dong notes, along with maybe a few 50 000 Dong notes, will make life that little bit easier.

Exchange now complete, there’s just one more thing you need to do before you head out to start spending.

And that is to count your newly acquired Dong in front of your exchange person before you leave the store.  It may help to solve any potential problems.

Oh, and one last thing on exchanging cash; only change what you need, when you need it.  Your own currency will take up far less real estate in your wallet or purse, than VND will. 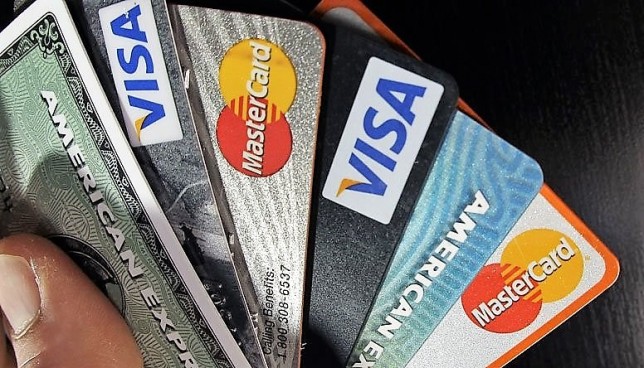 Credit cards can also be an option, but be aware that Vietnam is very much a cash society.

You won’t find too many street food vendors with eftpos facilities. 😊

But certainly for things like paying accommodation bills, perhaps certain tours, or even a meal or two in upper end restaurants, using a credit card might be a good option.  It may save you from making multiple ATM withdrawals, thus avoiding potential expensive fees, as well as carrying around large bundles of cash.

Please note, however, that most merchants will add a 3% commission fee to the transaction total.

Depending on what your bank charges you in international transaction fees, that may or may not be too much of an issue.

Hopefully that’s made the whole ‘money thing in Vietnam’ a little clearer.  Especially the bit about what Vietnam’s official currency, actually is. ;-)

12 thoughts on “Vietnam Currency and Money – How and why….”