Back to the alarm thing….

Up at 5.15am; fortunately it’s not raining; and by 5.30am, we’re on the back of motorbikes heading over to Green Village 1.

‘T’, who we met yesterday, is taking us.  Interestingly, he’s not really a morning person….

Coming with us are a couple of English girls, Kate and Annie, who are staying at Green Village 1.

We head out back to the road and begin our short walk down to the canal.  Memories come flooding back.

Apart from the boat’s motor, it’s very quiet and peaceful.  And there’s not too many people around; just the occasional local navigating the waterway themselves.

Initially it’s all lush green vegetation, but as we go on, we start to see a few houses.  While chatting with ‘T’, about nothing in particular, we both watch a local come to the back door of his house which overhangs the river.

He has a bag of rubbish in his hand, and while I think I know what he is about to do, I really hope he doesn’t.

But he doesn’t ‘listen’ to me.

Yep, straight into the river.

I shake my head, while ‘T’ lets out an audible groan.  He says he absolutely hates that, which is good, because it means there is perhaps some hope that attitudes will change.

No doubt a long way off, but you have to have some hope.  Well, that’s my positive spin on it….

Needless to say, we then spend a fair bit of time discussing Vietnam’s rubbish ‘culture’.

Pretty soon the lush vegetation gives way to the big city that is Can Tho, and we’re now onto the main river with the market up ahead.

Up towards, and then under the huge bridge, yep, it’s all coming back.

Lisa then mentions that she has some stomach pains.  Wonderful….

We’re soon right in amongst the market, and like last time, I just love it.

And how does it compare to last time?

Well, it’s still busy, and it’s still spread out over a fairly large area.  So yeah, it’s pretty much how I remembered it from three years ago.

Actually, there’s perhaps one thing that might be a bit different; and that’s the number of other tourists doing what we’re doing.

Well, not exactly what we’re doing, as most of them are on bigger boats with more people to keep them company.  They’re also wearing high visibility vests and life jackets.

Yep, much prefer the way that we’re doing it.

Weaving our way through all the larger wholesale boats, with their product displayed on their poles, as well as the smaller boats that are doing the buying, and we pull up next to the breakfast boat.

And just like our previous floating market tour two days ago, today we’re having phó.  As well as a caphe sua da, of course.

We sit, eat, watch, and savour.  Everything.

It’s brilliant, and I just love it.  And you realise that you must be doing something pretty good when other tourists are taking photos and videoing you.

Phó done, we move across to the pineapple boat.  And just like last time, there isn’t too much else that is better.  I mean, pineapple is always good, but down here, and especially when you’re sitting in the middle of a floating market, it’s just that little bit better.

We head up the river a bit further and then turn down a narrow canal, before getting off the boat to see how glass noodles are made.  While it was a bit touristy, it was still interesting.

A few minutes of relaxing and chatting to Kate and Annie in a local café then followed; the early start perhaps catching up with us somewhat; before returning to the boat.

Back through the market, under that big bridge again, and then onto the smaller river we came in on.  But market visits are not yet done, so we pull over to check out a more standard type land one.

And of course, it doesn’t disappoint.  They never really do. 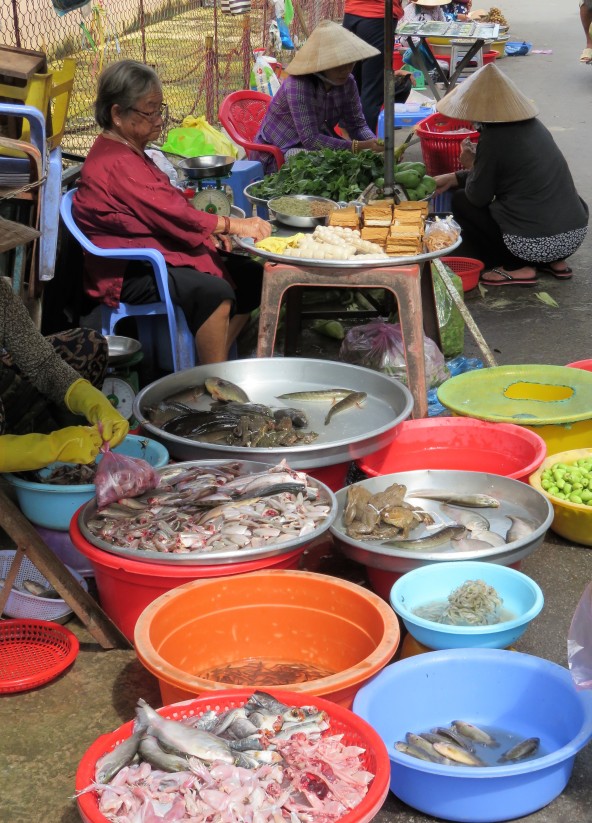 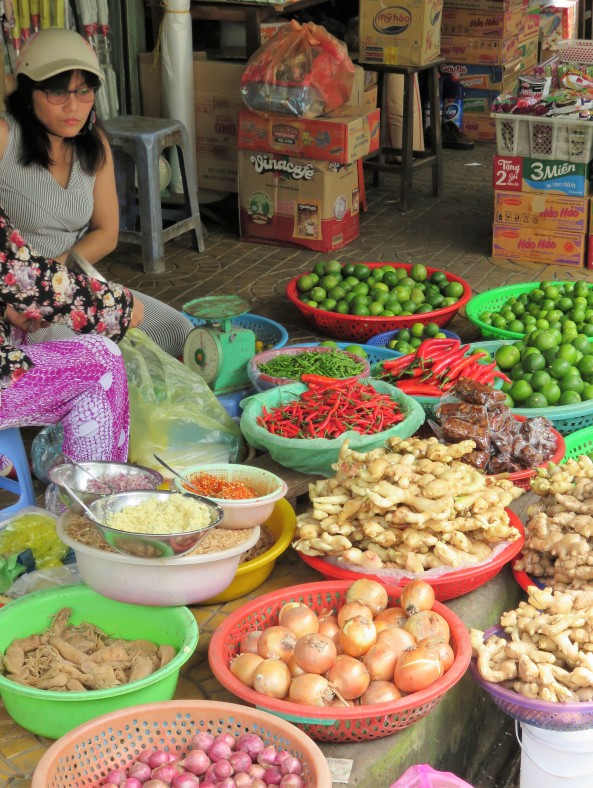 Heading back to the boat I spot a lady selling, amongst other things, stainless steel soup / phó spoons.  It reminds me that I’m sick of using the plastic spoons that the local take away Vietnamese phó restaurant back in Melbourne, supplies.

That first world problem is quickly solved with the purchase of four of them.  Not really sure why I got four, seeing as the kids aren’t fans of one of my favourite dishes….

But then again, at 10 000 Dong in total, it might have been a bit embarrassing only buying one or two.

Back on the boat, and while we start heading off towards Green Village, ‘T’ whips up an origami type grasshopper out of a palm leaf.

Geez, I couldn’t even get one to hold up my bike stand, and here he is making animals with them….

And it’s at this point that I manage to actually work out where they are in relation to each other.  Being on roads, and recognising them, that I was on three years ago, makes that possible.

Seeing, and driving over, the bridge that I turned off at when I had tea with the local guy and his possible future Philipino son in law, brought back great memories.

We’d actually ridden past his place yesterday, but didn’t realise it at the time.

Maybe it’s me, but I just find it difficult to get my bearings down here.  I’ll blame the many waterways….

Back to Green Village 2, and the early start has well and truly caught up with us.  Yep, rest and nap time.

An hour later, I’m done.  Time to do something.

Lisa has a headache, though, (interestingly, she didn’t blame the duck tongue….) and decides to stay in bed a bit longer.

Back out along, and over, the countless canals.  It’s quiet and peaceful, and again, like yesterday, even though it’s pretty warm, it’s very pleasant in the shade of all the foliage.

Lots of hellos and smiles, with quite a few a little surprised to see this western bloke riding a girl’s bike.

It was also nice to be able to put a few more pieces of the map jigsaw puzzle together.  Only taken me two days….

After a bit over an hour on the bike, I get back to Green Village about 3.00pm.  Lisa is up and has been talking to the girl back home.  Lucky she’s doing the parenting thing….

Apparently, the boy has been really good to her; doing things like driving her to school and the bus stop when required.

That doesn’t really sound like him, and it concerns me a little….

Oh well, what I don’t know can’t hurt me.

I convince Lisa to come out for a leisurely bike ride, using the possibility of finding a caphe sua da as the incentive.

We head back up to yesterday’s market but there’s not too many around, and unfortunately, the caphe sua da is a little elusive.

I’m actually okay with that; strangely….; but Lisa apparently ‘needs’ something.  Food, it seems, is a rather high priority.

Well, seeing as it’s now late afternoon, and seeing as we have not even been able to even find a coffee, finding food could be a bit of an issue.

And unfortunately, when Lisa has an issue like that, the issue quickly becomes mine as well.

I manage to find a small general store that sells drinks and snacks, thus alleviating ‘our’ issue.

A packet of chips, as well as a couple of bottles of sarsaparilla.

Yep, sarsaparilla.  Could not tell you the last time I had that.

There’s a lot of people out and about, with many bathing and washing in the river.

They also seem a little more excited than usual, perhaps because it’s a Friday afternoon?, and we get so many hellos and smiles it almost becomes tiring responding to them all.

But you do, because as far as I’m concerned, it’s a privilege to be in their neighbourhood and I’m always touched when they show an interest in us.  I’ve said it countless times, the Vietnamese really are incredibly friendly, especially when you get away from the main tourist areas.

We get back about 4.45pm, and well yes, it is a touch earlier than normal, but stuff it, it’s beer o’clock.

So, a couple of beers while sitting out on the veranda it is, which is a none too shabby way to finish off a day.

It turns out another couple have arrived at Green Village today, which is fine I suppose, but I had been enjoying having the place to ourselves.

Get cleaned up for dinner, and then Cammy comes down to ask if we’d like to help with the food preparation.

Yep, Lisa would, and I’m more than happy to watch and play camera man.

We head up and meet the new arrivals – Connor and Sarah, who while they aren’t Australian, are actually living in Melbourne at the moment – who are already slicing things.

They’re actually here on business, as Connor works for a rather large multinational brewing company.

Yep, I probably should have arranged to keep in touch….

Lisa joins in the slicing thing by cutting up both banana flower and banana palm.  The instruction is to cut it very finely.  She doesn’t, and as such, most of her efforts are rejected.

The camera man shows her how it’s done, and Cammy is very impressed.

Food prep done, we sit and chat for a while until dinner arrives.  Steamed rice, fried chicken and pork, banana salad minus Lisa’s chunky bits, along with fish sauce.

The food, as usual, is good.

Dinner done, it’s time to head back to the cabin as the rain begins.

Seeing as most of the beers in our fridge seem to have disappeared, a few extra ones are procured from another cabin.

We need to pack up as we leave tomorrow morning, and I’m not overly happy about that.  While I’d looked forward to every aspect of this trip, this particular component at Green Village was one that was a just a little bit special. And now, it had essentially come to an end.

Added to that is the feeling that the holiday is starting to really fly by now, and that’s not making it any better.

And the fact that tomorrow is a goodbye day, well, that just makes it so much worse.

Yep, tomorrow was going to be another one of those difficult days.

Pack up done, I spend a fair bit of time out on my veranda with a beer.

Partly to watch the impressive thunderstorm, and partly to keep out of Lisa’s way.

She’s been here for a week now, and she’s starting to annoy me.

Possibly because I’m annoying her.

Chicken and egg thing, I suppose….