These reports are from our very first trip to Vietnam in September 2014, so prior to the previous trip reports!

Originally posted on TripAdvisor, this is Trip Report #6…

While leaving Hoi An had been difficult, I didn’t have too many issues with leaving Hue.
It was time to move on and I was looking forward to our next destination – Hanoi.

In the back of my mind I was a little concerned about Hanoi. Or more to the point, my opinion on what I thought Hanoi would be like.

I was expecting a lot and I expected to love the place.

I was now worried that it may not live up to these expectations.

Like I said, it was time to move on.

Another uneventful flight (the best kind) with Vietnam Airlines and we arrived in Hanoi around 5.00pm.
Our driver, organised by our hotel The Artisan Boutique, was waiting for us at the airport. Gee, it makes life easy.

About to find out.

I found the drive into the city really interesting. The way it changed the closer we got.
Wide roads, open spaces, lots of cars.
To bit more built up, lots more cars, a lot of people.
And then, bam!

I’d heard, and read of, the old quarter many times. But I didn’t really know what to expect.

There was no mistaking it. I knew when we were in it because it just looks so different from the rest of the city.

The buildings, the cars, the motorbikes, the people. Wow!

I loved it and I hadn’t even got out of the car yet.

Finally arrived at the hotel, a quick check in, and it was time to go out and look around.

Did I mention the people?

We didn’t realise it at the time but that particular weekend was the 60th anniversary of Hanoi’s Liberation Day.

It was madness. The noise and the crowds.

To be honest, while it was interesting at the beginning, it did become quite irritating. It was just too much.

It’s funny though. If that had been our first night in Vietnam I’m not sure how I would have coped with all that. HCMC had been a huge culture shock on day one, but now, a little over 2 weeks in, it was just what it was. I think it was around this time that I realised that I had gone from completely out of my comfort zone, to then feeling reasonably comfortable in this “strange” country, and to now actually feeling confident.

It was a nice feeling.

And got lost. (two weeks in – some things never change…..)

But it didn’t matter; it’s all part of it.

And in the end it all worked out.

We were trying to find somewhere to eat.
Not really interested in a ‘typical’ restaurant.
Looking to be a little more adventurous. A little more ‘local’.

Actually, it wasn’t us who found it.

It was them that found us.

From across the street we were dragged in to a street food place.
It was packed with locals sitting on the footpath. Not an empty chair to be found.

But that didn’t matter. We could sit upstairs.

So before we know it we’re walking up the narrowest, steepest stairs I’ve ever seen.

Finally at the top, we are now in a room no bigger than a small bedroom.

Two people are already sitting there; a local woman and her young teenage son. (Hers seems happier than mine….)

They smile and move along to make room for us.

We smile….., nervously….., and sit on our small plastic chairs.

I now have time to think…..

I just have no idea….

I look at the boy. And the girl.

The same one from the train.

Yep, I must be doing something right.

Manage to order some beers. Beer’s easy to do.
And some Coke. Coke’s more difficult.

The food arrives. There is heaps of it.

Big bowls of some kind of noodle and beef soup, along with more spring rolls than I could eat in a week.

And what a great experience.

They still have that look. But it’s not quite as severe.

We negotiate those stairs again and head off back into the madness.

After an hour or so; getting lost takes time; we find our way back to the hotel.

Too many people. Too much noise.

It’s been a long day and we have to be up early the next day to get to Halong Bay. Well, Cat Ba Island to be exact.

We decide to travel a little lighter so we leave our big suitcase at the hotel and take two bags between us. We’ll be back in a week.

Our driver taking us to Haiphong City is due to pick us up at 6.30am.

I’m getting worried. Maybe we should have just done the ‘usual’ Halong Bay tour.

A phone call to Cat Ba Ventures – all is good. He’s on his way.

Apparently there were some streets barricaded for the anniversary celebrations last night.

He eventually arrives and we’re off.

The plan is to get to Haiphong and then take the hydrofoil to Cat Ba Island.

We get to the hydrofoil about 5 minutes before it leaves.

Fifty minutes later we’re on the island.
A little bit of paperwork at Cat Ba Ventures’ office, a quick visit to the shop to get some drinks and within the hour we’re on our boat.

Just the four of us along with the captain, the cook and the guide.

So, initial impression of Halong Bay?

Stunning! What an amazing area.

We spent the first hour or so making our way through Lan Ha Bay and up to Halong Bay.

We pulled up next to a small fishing boat and the three crew negotiated a price for our lunch.

Some type of fish along with 5 crayfish.

Half an hour later we were eating them. Now that’s fresh.

After lunch it was time for a swim. Ohhh,……the water. Beautiful!

We then moved off to another area.

Around islands, through caves. Pretty special.

We even came across a colony of monkeys.

Our guide managed to get their attention and they actually made their way down their island for a closer look at us.

One final swim before heading back to Lan Ha Bay where we would moor for the night.

Another magnificent meal for dinner. Again, so fresh. I’ve never eaten this well in my life.

Up early next morning to make the most of our final day.

A big breakfast – just so much food – and we were off to look at a cave on one of the islands.

Then it was back up through Halong Bay and on to Bai Tu Long Bay.

Dropped in to a floating fish farm, had another couple of swims – including jumping off the top of the boat (just a big kid really) and just generally lazed around and took in the scenery. 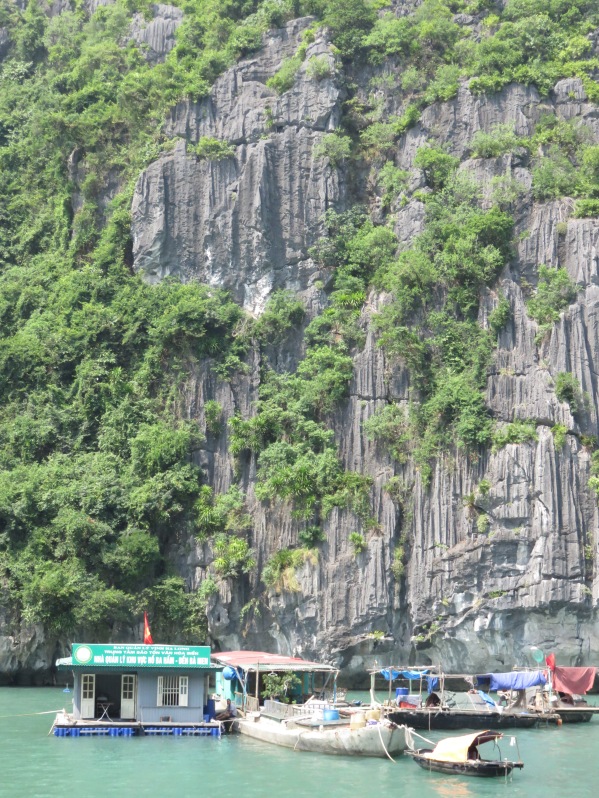 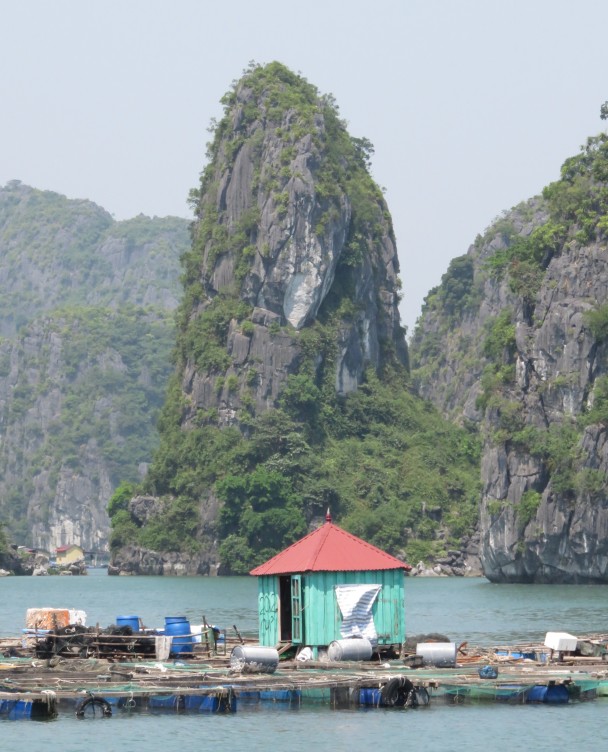 After lunch, and one final swim, it was time to head back to Cat Ba Island.

We needed to be on the 2.00pm hydrofoil to get back to Haiphong as we had organised a driver to take us to Ninh Binh.

We made it. Just.

I love it when a plan comes together.

Our driver met us, as promised, and we began our 3 hour journey to Ninh Binh.

The drive itself was pretty good and while it’s not overly scenic, it is interesting. Well I found it interesting.

It is very rural and you do drive through a lot of small towns and villages.
It is very different to the big cities.

And for the first time I saw ‘those’ restaurants.

I didn’t see anything I didn’t want to see but it was something that I was now aware of.

We finally arrived in Ninh Binh just as it was getting dark and checked into our hotel for the next four nights.

That will have to be in instalment 7.

When we were researching this trip Halong Bay was something that we were always going to do.
But the more I learnt about it the less I wanted to do it.
It wasn’t that I didn’t want to see the place, it was more that I didn’t want to see it the way all the tour operators want you to see it.
All the tours sounded the same and seemed too regimented.
I really had no interest in getting up early to do Tai Chi…..

Their attitude is that it is your boat. Your trip.
You decide what you want to do and for how long you do it.

It was up to us what we did.

It was far more appealing to me than the ‘typical’ Halong Bay tours.

So, glad we did it the way we did?

No regrets whatsoever and would, and will, happily recommend Cat Ba Ventures to anyone.