These reports are from our very first trip to Vietnam in September 2014, so therefore prior to the previous trip reports!

Originally posted on TripAdvisor, this is Trip Report #3…

Time to leave the Mekong. And that wasn’t easy.

What was even harder was saying goodbye to the people.

Not just the locals, but the people – now friends – who had made our stay over the previous 2 nights so enjoyable.

One last bike ride to soak it all in before our taxi arrived at 11.00am to take us back to Can Tho.

A final piece of advice from our host, Thy –

“Go straight into the bus office / station when you get there and ignore anyone who offers to take your bags. They will try and take you to another bus.”

Well, what do you reckon happened when we got there….?

Good advice as it turned out.

Plan went well until we got to the bus station.

Couldn’t see our ‘saviour’ from earlier in the week.
And couldn’t work out where the shuttle bus left from.

Added to that, the stress levels were beginning to rise as 300 taxi drivers (ok, maybe not that many……felt like it though) vied for our business.

Scanning the ‘mayhem’ in front of me – no green & white or red and white cars.

Then off to the side……a Mai Linh uniform.

Before he can say “Taxi?”; I’ve nodded and said yes.

We’re on our way.

(The reason for the original idea of getting the shuttle bus to the bus office, was to save a few dollars on the taxi fare. I can’t remember exactly how much the fare ended up being but I think it was around 150 000 dong? Seriously, in the whole scheme of things, sometimes it’s just easier to pay an extra dollar or two for the convenience.)

Assumed, for some reason, it may have been called Nha Trang airport.

There’s a reason for that. It ain’t in Nha Trang. It’s miles from it. (Possibly a little spoilt with HCMC airport’s proximity….)

Anyway, 45 minutes later (on a freeway and over a mountain) we arrive in Nha Trang proper.

Turning off the street and into a laneway (fortunately I had read on TA that the hotel was down several laneways. If I hadn’t remembered that, I may have been a little concerned) we made it to our hotel for the next 3 nights – Carpe DM.

A quick unpack; kids have their own room – much better idea; and we’re out to find somewhere to have dinner.

Back out along the laneways (hoping I can remember the way back later…) and we find a nice little restaurant down another laneway.

Bit of a walk around after dinner to see what’s around and to get our bearings.

An hour later I have an opinion on Nha Trang. To be fair I decide to keep an open mind until I’ve given it a bit more time.

First full day and Lisa and I go for a walk.

Kids are still in bed. Ummph, who would have thought….

Check out the beach, the sights, the town.

Mind is starting to close…..

On our round-about walk back to the hotel we find ourselves walking up a street that seems different. It’s not immediately obvious to me why. Then it hits me.

No tourists. No tourist signs.

It just looks like a street you’d expect to see in Vietnam.

So after a quick bite to eat, and a couple of fruit smoothies (which Lisa manages to knock over, yes both…. – all over the table….and the floor….. waitress now really loves us…..) we head back to get the kids so we can spend some time at the beach.

They should be happy with this scenario. They had both said a couple of days earlier, that rather than walking around looking at sights, they would prefer to just go and spend a day at the beach.

Back to the hotel – kids still in bed…..surprise, surprise – we tell them of our plan for the day.

Ohhhh, do we have to?

This is the point where I count to ten.

This is also the point at which I realise that my head and that brick wall are going to get sick of coming together.

We did eventually get to the beach. And guess what? They had fun.

Who would have thought……

Day 2 – off to VinPearl Island.

Quick taxi trip and then hand over more dong than I have all week to the lovely girls at the main entrance.

This better be good.

Into the cable car to get across to the island.

The cable car is good. Great views of the island and of Nha Trang itself.

Finally on the island. It now occurs to me that I actually don’t know what VinPearl Island is.

So what is it?

It’s a theme park. It has rides, waterslides, an aquarium, a sandy beach and lots of tourists.

Just what I came to Vietnam to see……

It’s alright. Bit of fun…..in between walking up the 200 steps of each waterslide….
And those steps are the hardest, sharpest and most uncomfortable things you can walk bare foot on……

But really, it’s just a theme park. And you can do that anywhere in the world.

And Nha Trang? And my open and closed mind….?

If you want beach, if you want to be around lots of other people just like you, if you like loud music, loud cars, tacky, garish lights. Then you’re going to love Nha Trang.

It reminded me of Australia’s Gold Coast

I even got the feeling that the locals weren’t that happy there.

And why I feel that way?

I sensed that the tourists didn’t really interact with them. The locals received nothing from them and as such tended not to give anything back.
Even walking back through the laneways to Carpe DM the locals tended not to make eye contact.
This actually made me work harder at making an effort, with varying degrees of success.

I just found it all a little sad.

Oh well, nice to see / experience I suppose but I wouldn’t go back.

But really, it comes down to what you’re looking for.

Next day we returned to that far away airport for a flight to Danang.

And ultimately Hoi An.

Happier days to come…….but you’ll have to wait till I write that one. 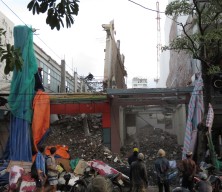 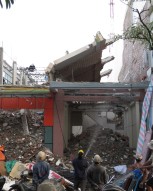 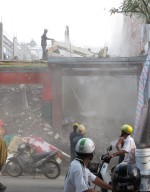 On our way back from Vin Pearl we walked past this building with a small crowd gathered at the front.  Workers were in the process of demolishing it, and it was being done in a very Vietnamese way.  It was both interesting and entertaining!